Any New Yorkers want to join me tomorrow for the annual Roosevelt Ave Street Food crawl? If you're a real foodie, then you know that some of the best cheap food is done by recent immigrants. It's called the taco crawl, but there will be lots of other things like ceviche, corn fungus quesedillas, samosas, etc. It goes right through the hearts of the South Asian neighborhood of Jackson Heights and the Latin American neighborhoods of Jackson Heights / Corona, ending at the famous Timmy's O's custard place. You don't have to stay the whole time; my husband is planning on leaving the crawl around 2 pm, right when we're in the heart of the Latin American neighborhood to find a bar for the Mexico v. Argentina game. I'm sure it won't be that hard :)

I was researching some materials for my classes and I came across this tip sheet originally aimed toward journalists reporting in Africa. Apparently it's been widely disseminated, but I only just came across it.

"Never have a picture of a well-adjusted African on the cover of your book, or in it, unless that African has won the Nobel Prize. An AK-47, prominent ribs, naked breasts: use these. If you must include an African, make sure you get one in Masai or Zulu or Dogon dress....

Always end your book with Nelson Mandela saying something about rainbows or renaissances. Because you care."

"How to Write About Africa" by Binyavanga Wainaina 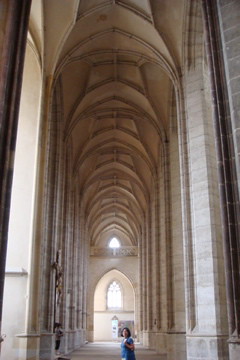 Me in St. Peter and Paul Cathedral in Melnik, Czech Republic

It occurs to me that I never go to more houses of worship than when I'm on vacation? From Buddhist temples in Japan to Gothic cathedrals in Prague, it's like I'm on pilgrimage. 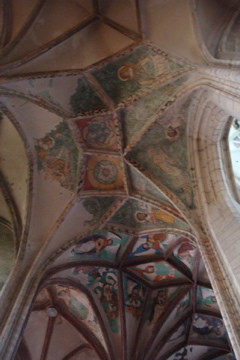 Anyways, so I've been back in the U.S. for about a week now, but I still plan on posting some pics here and there. After K went back to the U.S., I took the an old Communist-era train to Bratislava, Slovakia, had lunch there. 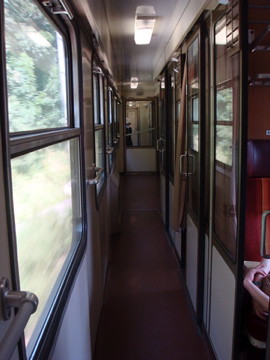 Train from Prague to Bratislava, Slovakia

Then I hopped on a hydrofoil up (down?) the Danube to Vienna, Austria. Bratislava was like Prague, only with a higher ratio of ugly Soviet cement block buildings to pretty Baroque/Renaissance buildings. 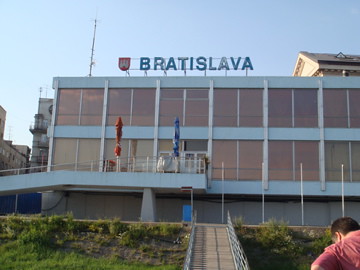 The hydrofoil / catamaran was AWESOME. There is nothing quite like having a warm summer wind hit your face when you're zooming along the Danube at I-don't-know-how-many-but-it's-rilly-rilly-fast km/hr. 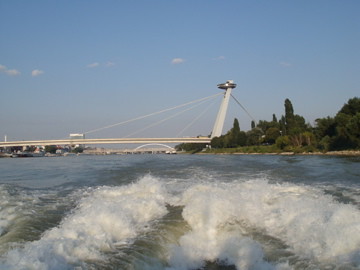 From the back of a hydrofoil, cruisin' the Danube, the famous (I have no idea why) Bratislava bridge in the background

On the way, I even spotted a castles here and there. 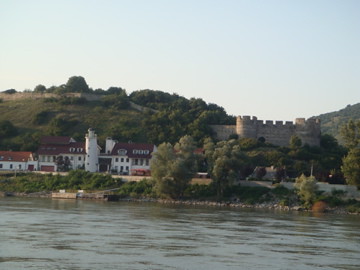 Castle on the Danube, Austrian side?

Vienna itself was fabulous. To be honest, I enjoyed Vienna a heck of alot more. Prague was the capital of a country, and Vienna, well Vienna was the capital of an EMPIRE, and you can totally feel that vibe. The EU, OPEC, and the European seat of the UN are all in Vienna. Furthermore, it's still got some relatively strong financial markets, all of which contribute to it being a much more cosmopolitan city 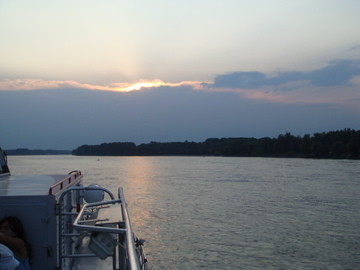 Sunset on the Danube

And I know this doesn't fit anywhere in my post, but I have to leave you with one final picture from Prague. 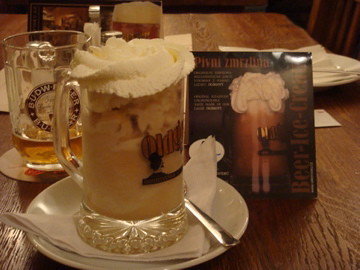 So K & I thought it would be interesting to head to outside of Prague. It was a lovely train ride on an old Communist-era train that passed sunflower fields along the way. We decided to head for Sedlec and Kutna Hora, an old medieval mining town that is now a suburb.

One of the main sights of Sedlec is the Sedlec Ossuary. 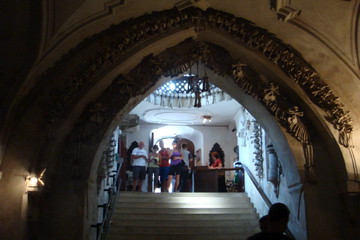 Look closely and you'll see that the arches are decorated with human bones.
( Collapse )

Yes these are all real bones.

There were a whole lot more weird things but I just don't have time to post them all. Suffice it to say, K & I walked around, totally bashing the Middle Ages because we thought this was something that came about because of the Black death. When we left and picked up the brochure, we learned that this only dated back until the 1870s. It's a tiny graveyard, smaller than most American suburban yards and apparently what happened was that a couple hundred years ago, someone went on Crusade/pilgrimmage and brought back soil from Golgotha and sprinkled it around the Church courtyard. Suddenly everyone wanted to be buried there so there was just bodies piled on top of each other.

The odd thing about the place was that even though it had that dark coolness of stone in the mid-summer, it was also really humid in a way that it wasn't outside. Now it was probably all the tourists wandering in, but at the same time it felt very odd, as if the skeletons were reflecting our breath back on ourselves.

I'm in Vienna now, where I finally have time to post a few photos from Prague. Prague was a great little town, but to me (jaded New Yorker that I am) it felt more like a country town then a city. On the whole it was fairy-tale picturesque, except in a few places where you found giant Soviet concrete block buildings wedged in between Renaissance / Baroque loveliness

On my way to Vienna from Prague, I stopped by Bratislava (the capital of Slovakia, which used to be part of the country Czechoslovakia), and found it to be an even smaller version of a European country town, only with more Soviet concrete buildings (pics of Bratislava and subsequent hydrofoil ride down Danube later).

I'm quite eager to check out Vienna, seat of the Hapsburgs, and what seems to be a cosmopolitan imperial capital. Anyway, here are a few pics from Prague. 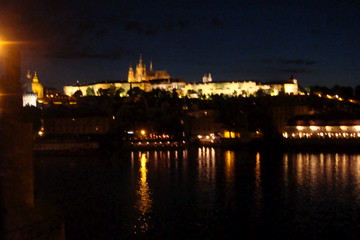 View of Prague Castle from Charles Bridge at night

More pics to come including the Bone Church!

There was another fabulous KGB reading tonight, but it was extra special because it was a fundraiser for Clarion West, and because fellow '07 classmate lilahwild came too! It was crowded as usual but good food and good times were had at the post-reading dinner.

Now I'm sitting in Penn Station, using the internet in the LIRR waiting room as I wait for the midnight bus to DC for RWA. They're renovating the waiting room and I'm not really sure to what end. First of all, there are periodic fake bird noises playing in between the elevator music. I have no idea why. Second of all, on one of the two TVs, there seems to be this LIRR cheery propaganda footage being played over and over again. There's no words, no captions, just footage of janitors cheerfully cleaning the trains, passengers reading newspapers with big smiles and workers working hard. It's like video you might see for a Japanese karaoke video; bland and overly cheerful.

It's very strange. In Japan, it wouldn't be, but in New York City? That's just weird.

So when I was in Thailand a few years back, I found the most awesome internal frame backpack. It actually held the weight well, and was not too ginormous for my backpacking needs. I lent it to my brother, who after a long story, ended having it stolen in a Brooklyn laundrymat.

It sure could have been handy on this upcoming trip to Prague, Bratislava and Vienna. Anyone in the NYC area have a nice internal frame backpack they want to lend/rent to me? I'd buy one, but I'll be honest; I probably wouldn't get much use out of it over the next few years.

You know, I wanted to be busy and Not-In-My-In-Laws-House for the summer, but this is getting kind of ridiculous. I've been gone almost every single weekend since...Wiscon for various weddings, visiting family / friends.

Last weekend, we flew out to Wisconsin for a good friend's wedding. It was held on the farm that has been in their family since 1942. My friend's mom grew up on the farm, waking up at 4 a.m. to milk the cows, feed the pigs, all before becoming a jazz musician/teacher in NYC for most of her adult life. She's retired to the farm, which is no longer a working farm, but still incredibly beautiful. You know all those children's books written in the 1950s/60s about kids running around in the grassy fields and coming back to the porch to have a tall glass of lemonade? It was that kind of farm. Really awesome, even though it was interesting about how all the white NYCers kept talking about how strangers would wave to them when passing them in a car, which did not happen to any POCers (I'm just going to chalk it up to the fact those people probably don't know any POC, since the wave was explained to me as a just-in-case-I-know-them thing). Though there was an ad for a German festival in October that had the notation in the ad that "A Sgt-of-Arms will be posted to keep the Irish at bay" which I'm not sure if it was a joke or not.

We also got to visit his family friend's farm, which is a working organic sheep farm. If you are into knitting or spinning your own wool, I can think of no better people to support than Greg and Judie Sage at Hickory Hills Farm. They were the nicest people in the world, and took time out of their busy day to show us their farm. I held little lambs in my arms and actually got to watch a lamb being born (which was kind of non-eventful, until you saw a sheep swing around with a baby lamb head sticking out of its butt).

This weekend, I'm skipping Readercon to go visit a good friend in Maine who races sailboats. The following weekend will be the RWA National conference in DC and then the weekend after that, I will be going to Prague, thanks to my husband who was able to get me a free ticket with frequent flyer miles! Since I'm teaching World History this fall, I'm thinking about also a short trip to Bratislava, Slovakia and Vienna, Austria. Suggestions and advice would be welcome!

Not only did I find a place that makes it fresh and serves it to you in a cone, but they have pints for you to take home too!!! It's pricey (like about $5 after tax) but SO incredibly worth it. Cones are cheaper, but I don't remember how much.

I discovered Black Sesame Ice Cream at Cafe Zaiya. It's less than 1/2 a block away from the 42nd St Library. Literally, if you walk out of the library, down the steps, between the lions and straight across the street to the next block, it will be on your right side.

It's a perfect treat after accomplishing some writing goals in the Rose Reading room.  And it's even better than the stuff in Kyoto.

And if you're really hungry, I have to admit that Chiyoda sushi next door to Cafe Zaiya is not bad either. They actually had my favorite sushi (that I have not been able to find in the U.S.) negi-toro which is fatty tuna with Japanese green onion.
Collapse